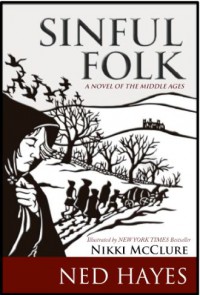 I’ve read medieval mysteries characterized as medieval noir, but Sinful Folk by Ned Hayes is as noir as it gets.  The medieval villagers we meet in this novel have dark secrets, and a number of them have either committed terrible deeds, or stood by without protest while they were perpetrated.  Many of the nobility who think of themselves as superior are no better.  Characters who have principles are seen as simple and childlike.  Christianity is not the faith of a loving God, but one that justifies acts of cruelty and intolerance.  Welcome to a 14th century England where chivalry is very nearly dead, and hearts that are pure are likely to be pureed.

The mystery of the five dead youths of this village who were burned alive is at the center of the narrative.  Surprising developments arise during the process of discovering the truth about this awful crime.   The truth about various characters changes over the course of the novel as their secrets are uncovered.  I thought that the protagonist had layers of complexity while still being sympathetic.  I wanted her to triumph against all the obstacles in her path, and I liked the bittersweet ending.

For the blog version of my review see Book Babe.